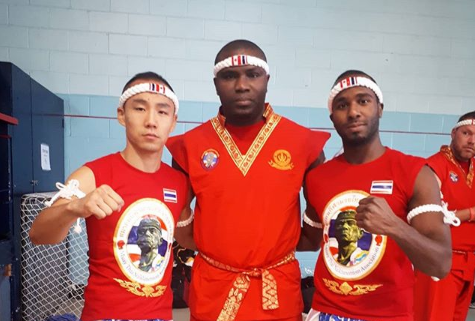 Please join us in welcoming Kru Clifton Brown as Head Coach at Lotus Fitness & Thai Boxing! Kru Clifton is Canada’s most decorated Muay Thai practitioner and a 5 times World Champion, attaining 32 knock outs, out of his 43 wins before retiring in 2010. Many of us have been training under Kru Clifton’s tutelage for a while and we can’t wait for everyone at Lotus to learn the traditions and culture of the art of Muay Thai from such a venerable and esteemed teacher.

Learn more about our head coach at his Wikipedia page.

by Lotus Fitness and Thai Boxing

Lotus Fitness and Thai Boxing is located at 17 Atlantic Avenue, in the Liberty Village neighbourhood of Downtown Toronto. We deliver an Intense Workout, with Authentic Muay Thai Instructors, in a Welcoming Environment.

previousHow to Clean Boxing Gloves (Keeping Them From Smelling)